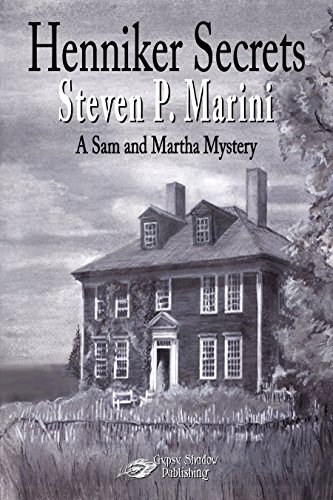 A ghostly legend is brought back to life when Martha’s brother, Bart, buys the old Ocean Born Mary house with his partner Auggie.

It is a conflicted friendship. A woman named Teresa shows up, bearing a shocking resemblance to a picture of Mary’s ghost. She deals herself in on the action, winning over Bart. Her presence, however, adds to Bart and Auggie’s troubles. Martha grows suspicious of Bart and his business partners, believing it will lead to trouble. Bart gets in deeper than she could imagine and she needs her lover Sam Miller’s help. Like their previous adventure in Schmuel’s Journey, the two must outwit a killer to get at the truth.

Steve Marini holds a Master’s degree in Educational Technology from Boston University and a B.A. in Business Administration from New England College and has spent over thirty years in the Education/Training field, including posts in higher education and the federal government.

Although he describes himself as a “card carrying New Englander,” he lived for twenty-six years in Maryland while pursuing a career spanning four federal agencies. His background has enabled him to serve as a project manager at the National Security Agency, the Environmental Protection Agency, the National Fire Academy and the Centers for Medicare and Medicaid Services, where he worked with teams of experts in various fields to develop state-of-the-art training for both classrooms and distance learning technologies.

A “Baby Boomer,” Steve has taken up fiction writing as he moved into his career final frontier. Married for thirty-six years, a father of three and a grandfather, Steve and his wife Louise own a home on Cape Cod that will serve as his private writer’s colony for the years ahead.