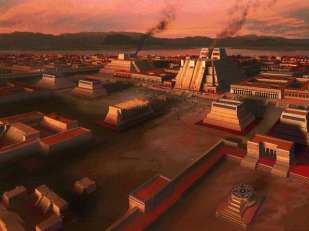 Tenochtitlan, capital of the Aztec Triple Alliance, still stands in 1810.

For three-hundred years, their empire has survived conquistadors creeping through their jungles, plagues wasting through their streets, and black-robed missionaries denigrating every aspect of their society, their dreams, and their way-of-life, all for the sake of selling bibles. Thanks to Eagle-Warriors and Ocelot-Kin slipping in and out of animal-skins; to mystics and healers washing away plagues; to cannibal-gods peering out from temples atop pyramids, the Aztecs have survived… but at great cost.

The empire is exhausted. The people question their traditions. The elites are losing confidence in their Speaker. Their armies march continuously, enduring cannons and muskets along the frontiers, then rushing to stifle dissent and rebellion in the interior. European privateers prowl the coastlines, eager to seize Aztec gold, eager to cart away Aztec slaves. And to the north, old colonies evolve into new rivals – the Thirteen States have won their war of independence, the République du Quebec has allied with Napoleon’s revolutionary France, and to the south, the Portuguese imperial family have moved their crown to Rio de Janeiro, Brasil. The elders of the Triple Alliance warn that a renewed era of colonization is dawning.

It is a time that inspires bold solutions and desperate reactions. A brash general arrogantly drags his pregnant wife through thunder and war, seeking glory, provoking Texans. A merchant’s widow lobbies for diplomacy, dreaming of a sweeping treaty joining the Triple Alliance with their northern neighbours – the Comanche Nation, the Iroquois Confederacy, and the Manitoban Provisional Government, among others. And a young intelligence agent goes rogue, drawing mercenaries and pirates into her web, inspired by a prophecy born in her own imagination, determined to reshape the Earth according to her nature.

Meanwhile, half-a-world-away, a new terror is stirring, buried beneath a manger in Jerusalem…