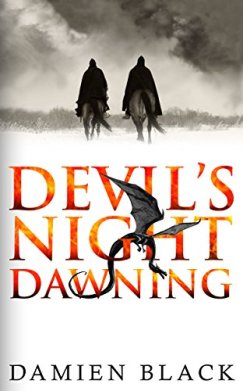 But with the wizard’s servants on their trail and their kingdom on the brink of civil war, can they stay alive long enough to find their hidden enemy? High fantasy, supernatural horror, detective fiction and chivalric romance join forces to devastating effect in Devil’s Night Dawning, a classic work of epic fantasy with some very dark undertones! When young novice Adelko is assigned to legendary adept Horskram, he rejoices at the chance to lead an adventurous life. An adventurous death isn’t what he had in mind – but it comes calling when they learn of a sorcerous theft, one that could bring ruin on the Known World. They suspect a demonologist at work, but don’t know anything for sure. Whoever it is knows who they are and wants to silence them – permanently. As they flee from one danger to another, their homeland erupts into civil war – the rebellious southern barons have reunited and want to dethrone the King of Northalde. The world they know teeters on the brink of a momentous struggle that will reshape it forever…

For as long as he can remember, Damien Black has been blessed and cursed with a hallucinogenic imagination. His sleep is disturbed by strange dreams that he struggles to remember upon waking, glimpses of worlds where superstitions are reality and prayers might actually work. The only cure he knows for this malady is writing, an auto-exorcism he performs on himself daily. Over the years, these scribblings have evolved into horror-strewn tales that plot a winding course through the tropes of fantasy fiction.