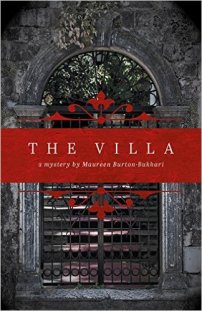 After her husband’s violent death on the rocky shores of their quiet fishing village home, Hannah is plagued by horrifying and confusing nightmares that make her question everything she knows about herself and the night that changed her life forever.

When she decides to befriend an outsider to the town, in the hopes of shaking off the depression and grief that have lasted for more than a year, there’s no way she can predict the story this intriguing stranger will tell… Claiming to be one of the mythological muses, daughter of Zeus and Mnemosyne, and mother of the siren responsible for her husband’s death, the visitor invites the young widow to Saudi Arabia, to stay at what has been the family’s private sanctuary for countless generations: The Villa.

Maureen Bukhari grew up on the Great Lakes surrounded by a large family. She has been creating stories since she was 12 years old, helping people to see the world through eyes that open just a bit wider to the possibilities around them.

While the wheels of her imagination have never stopped spinning, she spent much of her professional career as a medical laboratory technologist, working and traveling in the Middle East and Europe, where she visited the ancient antiquities of the world―and found inspiration in their far-reaching shadows.