What is the most important thing that people DON’T know about your subject/genre that they need to know?

My current book, Finding Pluck, does not easily fall in any particular genre. This makes it more difficult to market. This cross-genre categorization is best explained by a blogger, Connie Flanagan, in her blog Everything Indie: “Despite addressing homosexuality, “Finding Pluck” isn’t gay fiction; it explores the subject of morality, but it’s not a morality tale; although including a witch and ghosts, it’s not a paranormal novel; while love is found in relationships, it isn’t a romance; and the unexplained disappearance of Damien, aka “Pluck,” fails to render it merely a mystery or a crime novel. I would also hesitate to classify it as “new adult” because, although Finding Pluck includes themes such as leaving home, starting college, making friends after high school, sexuality, identity issues, and loss of innocence, it encompasses so much more of interest and value to readers of all ages.” See full review here.

I’ve been a stock boy and bagger at a grocery store, a carousel ride operator at the beach, a mainframe computer programmer, a systems engineer, a television producer/director/cameraman at a major university, a biomedical media director at the same university, a marketing manager for an adult marketing company, a manager of multiple trade magazines, a real estate sales person. With all this, one would think I should be able to get some good story ideas!

Different ways. I have started with the ending, usually a meaningful and poignant scene, which then motivates me to write how the novel got to that point. In Finding Pluck, it was more an idea or premise, which defined where the novel would go. I outline in stages. Sometime it is just a sketch, but if the novel shows promise, it will eventually be fully fleshed out in a detailed outline. I outline using a database. Each scene (or sometimes chapter) is one record. Each record shows a synopsis of the scene, a time frame, people in the scene, which draft (1, 2, 3, final), a rating of the quality of the chapter, notes on problems, technical notes, and notes on things to add or remove. New chapters can easily be added when needed. There are probably commercial writing programs to do this, but I just created my own database. It is extremely useful for examining your narrative arc, making sure time frames are plausible, and makes it easy to experiment with re-arranging chapters. Also, it helps me know which areas I consider weak and need improving. If a chapter drags for any reason, (boring dialogue, no action, etc.) perhaps I can do something to change that. When I am actually writing the scenes, they often go in a different direction than I originally intended. If I keep this new scene, I would revise the outline for the scene. The outline is not fixed and definitely changes as the novel progresses.

Now, keep in mind, that what I say here is not necessarily universal for all books and all genres. I’m only addressing my novel. I’ve wasted money using ads in Goodreads, Facebook, Amazon Ads and Google Ads. They are way too expensive for the response I got. I also am leery with book promotion sites especially the ones which charge ridiculously high prices. I’ve experimented with some of those and found that I sold almost as many books on sites that charge nothing or charge very little. So, from here on, I will be very careful which sites I choose.

Finding Pluck is a social commentary wrapped in an enjoyable paranormal novel. It takes place in North Carolina in 1995 and follows high school student Taylor Hanes, who is desperate to get out of his small-minded dying textile town. He’s been accepted to a university, his ticket out, but family financial problems paint a bleak picture about his attending. Seeking out a scholarship, he is impressed with one that pays for everything and includes a stipend. The problem is, it is intended for gay students willing to work on equality for gays and Taylor is not gay. Nevertheless, he lies saying he is gay and receives the scholarship. This immediately unleashes hometown prejudice, but worst yet, the wrath of the ghost of the long-dead benefactor of the scholarship.

I belonged to a small writing group where we could bring in and read something every week. Finding Pluck started with the premise of a student pretending to be gay and with the working title, The Scholarship. In the course of about a year, the skeleton of the novel was complete. It took much additional time outside of the group to add depth and necessary detail to complete the novel to a level that I felt comfortable enough to send to some trusted beta readers.

The majority of the book takes place on a university campus in 1995 and in 1927. This required me to do extensive research about campus life in both those periods and forced me to think back on my own experiences. In a way, it was like reliving some of the good times. Music was prominent in the storyline from 1927 so it forced me to do a lot of research on popular tunes from that period, and I really enjoyed that. I also purchased annuals from that time period, and I even watched several silent movies from the twenties dealing with college life.

I’m currently working on cleaning up several short stories that I want to publish. Because of a vivid dream, I’ve also started on my first ever Sci-Fi piece. If you dream it and it sticks with you, you have to write it. There is enough material for a full novel, however since this is a new genre for me and I’m going into untested waters, it may be shortened to a long short story or a novella. Presently, the title is PROM, which is an acronym for a gigantic computer that is taking over the world. This is a common theme in Sci-Fi literature, but hopefully I can tell the story in a unique way. It is a cautionary storyline that is reinforced by the writings and thoughts of many current great minds such as Stephen Hawking. In the novel, the main computer serves mankind by supplying him with life-like robots that satisfy all of man’s wants and needs. In an unusual occurrence, one of these robots is altered, making him more human-like, and suddenly he realizes that the utopia that has been created isn’t like everyone has been led to believe. 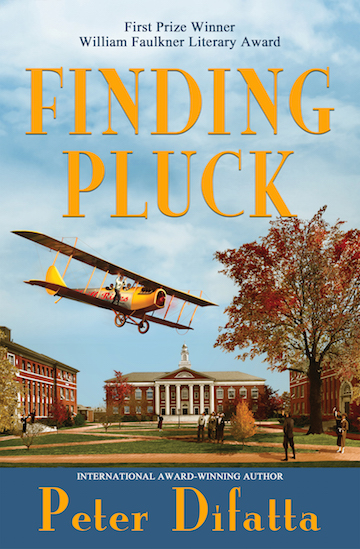 Where to connect with Peter and purchase Finding Pluck?